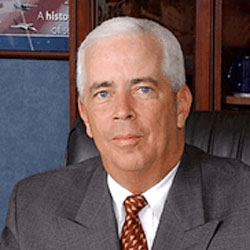 Steven Dwyer joined the Conexus Indiana team in January 2009 and was named President and CEO in March of the same year, leading an organization focused on growing and promoting the advanced manufacturing and logistics sectors in Indiana and preparing Hoosiers to take advantage of new opportunities in these industries. Steve’s background in manufacturing and supply chain logistics, combined with a personal concern for the region’s focus on employee development, had brought Steve into the Conexus initiative as external chairman while he was still with Rolls-Royce.

A native Hoosier, Steve returned to the state in 1999 with Rolls-Royce Corporation. Shortly after coming to Indianapolis, he was named President of the Rolls-Royce Defense North America business. In 2003, he was promoted to Chief Operating Officer of Rolls-Royce Corporation. In this role, he provided management oversight to more than 4,500 employees and all operations at the 3.6 million sq. ft. facility. This facility, based in Indianapolis, Indiana, is the largest Rolls-Royce manufacturing site in the U.S. Before joining Rolls-Royce in 1999, Steve served as General Manager of AlliedSignal, Greer, South Carolina, where he successfully directed the $200M company to nearly double its volume while achieving double-digit growth in productivity. He also served as AlliedSignal’s Director of Finance and Business Systems, where his financial team was named “Best in Corporation”.

Steve is a 25-year veteran of the aerospace and defense industry and has extensive knowledge of lean manufacturing concepts, continuous improvement programs and comprehensive internal control systems.

Currently Steve serves on the Board of the Indianapolis 500 Festival, the Advisory Board of Indiana’s Education Roundtable, the HIRE UP Indy Council, and Langham Logistics Advisory Board.

John M. Mutz, a consultant and private investor, is a seasoned executive with more than 50 years of experience in the fields of politics, philanthropy and business. For more than five decades, Mutz has been an Indiana leader committed to furthering the interests of the state and its residents. Prior to being named president of PSI (Indiana’s largest electric utility now known as Duke Energy) in October 1993, Mutz served four years (1989-1993) as president of Lilly Endowment. As head of the Endowment, he led the philanthropic work of one of the ten largest private foundations in America. The Lilly Endowment exists to support the causes of education, religion and community development. Under Mutz’s leadership, the Endowment expanded its community development work outside the Indianapolis area by using matching grants to encourage the creation of more than 45 local community foundations.

In addition to the foregoing, he has formerly served as:

Before joining the Endowment, Mutz built a sizeable record of community service as a public official, having served two terms as Indiana’s lieutenant governor (1981-89). While in office, he was president of the Indiana Senate and led the Department of Commerce and the Department of Employment and Training Services, in addition to serving as Commissioner of Agriculture. As lieutenant governor, Mutz initiated an agenda of job creation, training and placement. Under his guidance, Indiana dramatically altered its investment in economic development, which resulted in the state taking the lead in job creation among the Great Lakes states.Prior to serving as lieutenant governor, Mutz was a member of the Indiana General Assembly for thirteen years. A state senator from 1971 to 1980, he served as chairman of the state budget committee from 1977 to 1978. He served as state representative from 1967 to 1970. Among a variety of accomplishments, he helped write the Unigov legislation which created unified government in the Indianapolis metropolitan area.

In addition to more than two decades in public life, Mutz has been a successful entrepreneur and manager. His successes include the development of 31 Burger Chef restaurants and the formation of equipment lessor, Circle Leasing Corp. which was ultimately sold to Xerox Credit Corporation. Mutz is a director of CHV Capital, Inc. (a for-profit subsidiary of Indiana University Health providing capital for business enterprises) and Salin Bank and Trust Company. He is a member of the advisory board of Langham Logistics, Inc. In addition, he serves on the Board of Managers of Ontario Systems, Inc., (the largest provider of accounts receivable software in America located in Muncie, Indiana). He is a board member of Achieving the Dream, a national organization supporting the improvement and expansion of the community colleges.

His community service directorships include the Indiana Economic Development Corporation, the Indiana Stadium and Convention Building Authority, the Indiana and Indianapolis chambers of commerce, the Indianapolis Zoological Society, the Indianapolis Museum of Art, the United Way of Central Indiana and the Indiana Symphony Society, as well as other civic boards. He also serves as chairman of the Indianapolis Charter Schools Board.Mutz formerly served as a trustee of Hudson Institute, as well as a director of five public corporations: ADESA Corporation, Conseco, Inc., CCP Insurance Co. (a subsidiary of Conseco), National City Bank Indiana and PSI Resources. He is a former director of Security Group, Inc., Senex Financial Corp. and Walker Information and was a member of the advisory board of CID Capital, Inc. (Indiana’s largest venture capital firm). Mutz also served as national chairman for Ways to Work, a program to help former welfare recipients stay off welfare. Long active in school reform, Mutz has been a director of the 21st Century Charter Schools, the first charter school designated in the state of Indiana, and served as co-chairman of All Children Matter Indiana, a leader in the advocacy of choice in education. Mutz has been a columnist for the Indianapolis Business Journal and is the author of Fundraising for Dummies, now in its third printing. He is also the recipient of nine honorary degrees.

Mutz earned his bachelor’s and master’s degrees in advertising and business management from Northwestern University. He and his wife, the former Carolyn Hawthorne, are parents of two grown children, Diana and Mark, and have five grandchildren.In alphabetical order, Mutz’s speech topics include: 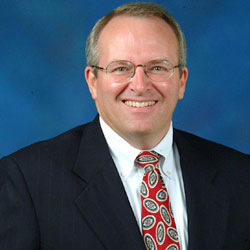 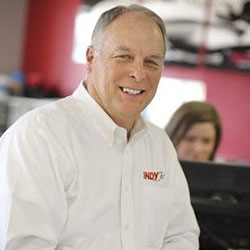 Bob, recently retired after 35 years with FedEx, most recently as Vice President  & General manager of Air, Ground and Freight Services.  He began his career with FedEx in 1980, as a maintenance technician in the Memphis hub and has held numerous management positions within Ground operations, Properties, Hub operations and Air, Ground & Freight Services. Bob, most recently lead the management teams at the Indianapolis World Wide hub and the Central region Air, Ground Freight services division which included sorting, trucking and aircraft ramp operations for the Central US. His management team oversaw more than 10,000 employees. Bob was a three time recipient of the esteemed 5 Star award and has been honored three times with the Presidents club. Both FedEx awards are given for outstanding performance and commitment to excellence and customer service. Bob has also been honored nationally with the Distinguished Eagle Scout award and the National Leadership Award for Junior Achievement. Bob believes in giving back to the community and has been very involved in Central Indiana local communities. He currently serves as board chair for IU Health West Hospital, President of Crossroads of America Boy Scout Council and President of Area 6 (Indiana and Ohio) Boy Scouts of America. He has served has a board member for numerous organizations within the Indianapolis area including: The Greater Indianapolis Chamber of Commerce (board chair), Indianapolis Private Industry Council (board chair), Junior Achievement of Central Indiana ( board chair), United Way of Central Indiana, Central Indiana Corp Partnership, Indiana Economic Development Corp., Conexus  of Indiana, Experiential Learning Foundation, Kelly school board of advisors, Board of  Trustees  University of  Indianapolis.

Bob is the Managing Partner of IndyJet holdings a full service Fixed Base operator at the Indianapolis regional airport. He earned his Bachelors degree in Business management from University of Kentucky.